On being young in Bosnia and Herzegovina

On Saturday 27th October, members of the Izazov team showed their films, alongside other young film-makers in London. After a busy few days of arts and culture workshops with TCFT in Bridport, they came on a minibus to London to share their films and to discuss film-making and activism strategies at Kings College London. 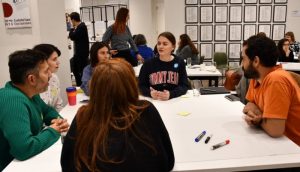 Seen alongside work by Italian and Sudanese film-makers, the Bosnian films told stories of import to their makers: one celebrates the city of Tuzla, another explores the phenomena of young people leaving the country and another seeks to provoke with a script written by a (self-confessed) rebellious teenager wanting to push back against a certain mind set in Bosnia. With introductions about the project and film-making process from Tina Ellen Lee and Robert Golden of Opera Circus UK, the young film-makers presented their initial film edits and then worked with the audience to discuss ideas for getting their films seen by audiences.

As researchers, it is inspiring to watch these young people take on the daunting task of learning a new craft and of taking ownership of the new voice it provides them. The initial idea of this project evolved out of key findings from our Art & Reconciliation research in BiH. This research engaged with artists, arts and peace-building organisations and young people involved in creative projects in BiH to explore how the arts may, or may not, facilitate reconciliation and whether or not the arts might reveal different ways to think about reconciliation. The term reconciliation itself was understood to problematic and contested.

This is especially relevant in the Western Balkans where the term is loaded with the politics of imposed (international) interventionism. Given this, it perhaps unsurprising to those familiar with the Bosnian context, that we found some young people who were involved and active in creative enterprises actively chose not to participate in NGO ‘reconciliation’ initiatives.

Disillusioned by the failure of politics and the sense that top-down interventions undermined and thwarted their own, locally formulated initiatives they had turned their backs and chose to disengage. A consequence of this is many organisations avoid the language of peacebuilding and reconciliation when seeking to engage young people. Interventions that are successfully building the capacities, skills and networks of young Bosnians to catalyse dialogue and drive change, such as PCRC’s creative multi-media projects, do so by allowing young people to frame the story on their own terms.

Of course there are significant systemic issues that feed youth disillusionment and disengagement. As was explained at the workshop by our co-investigator, Jasmin Hasić, young Bosnians face one of the highest rates of youth unemployment in the world, endemic corruption, an out dated education system and watch as many of their friends and family move away from the country to find work and build lives. Berina decided to do her film on this subject because the experience of her best friend leaving to work overseas at a key time in their lives had left a deep impression. She wanted to explore how the phenomenon of young people leaving is affecting families and the loneliness for those left behind. She explained, ‘I want people to think. They assume that life away from Bosnia is better without thinking about what it is that they are leaving’. 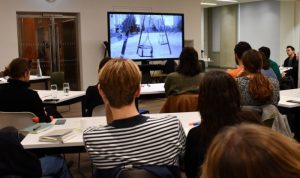 Making this film has for Berina awakened something, “I’ve re-discovered myself through this process. This is something that I wanted to do but I had not been allowed to”.   Her sentiments were echoed by others in the group who vocalised some of their frustrations of growing up as young Bosnians in a society which, fractured by politics, they feel does not support its youth. Hanna described:

‘We have three presidents and three constituents peoples in BiH. Where ever we are, we limited and suppressed by the ideology of nationalism, we are taught not to and pushed not to pursue our dreams because of other people’s wants. We are not supported by our local community because we do not have a definable local community – what is your local community when you have three different sides that are pulling each other from each other?.’

Despite their frustrations, these young people are proud of their country and want to fight for its future. Izazov means to provoke and with these films that is what these young people are doing. In the next month they are working to finish their shorts and in December will show them to audiences in Sarajevo as well as launching a website. Please stay tuned for more. 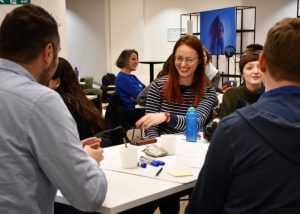 A CULTURAL PATH FOR FILM