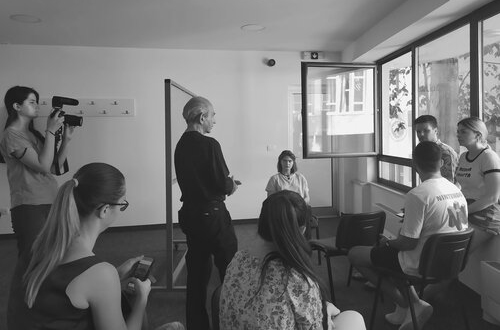 The word ‘izazov’ in the Bosnian language has many meanings. Its mostly used to mean ‘provoke’ or ‘challenge’. I won’t pretend I knew that before our workshops in Sarajevo over the summer, but the word is catchy and it sends a signal that the films created through IZAZOV! are intended to provoke thoughts and challenge perceptions.

During our first week of workshops in Sarajevo the group decided (after two long discussions in the sun) that the Bosnian chapter of Changing The Story, an international filmmaking and research project, will be re-named IZAZOV!.

After three separate weeks of workshops on filmmaking and activism in Sarajevo, Bridport and London its fair to say that as participants and organisers we’ve been truly izazoved, even if that’s not (yet) a word in Bosnian or English. Nor should it be.

I first got involved with Changing The Story as a student in Leeds. I was fortunate enough to be part of a group of Leeds students who came up with the project’s name and visited a township in South Africa called Tsakane to work alongside young residents to turn their storyboards and ideas into a short film. The storyboards were developed with Themba Interactive, a theatre organisation committed to encouraging social change through performance.

I was tasked with facilitating filmmaking workshops with a group of young participants from Tsakane to creative a film together based on a story they’d come up with called Heaven Hugged Me.

Through their film, they wanted to talk about their neighbours who regularly spend time in prison and to tell them why its better that they stay out of trouble so that they can look after their families and be a part of their local community. This was an issue our participants noticed in their township and something that they wanted to write a story about.

They developed the story, shot the majority of the footage, starred in the films, wrote the narration and provided the translation for subtitles in English.

The film they made was a way to think and talk about something that happens quite often in their community, but an issue that isn’t so fun or interesting to talk about at their age, or any age for that matter.

FROM SOUTH AFRICA TO SARAJEVO

Skip forwards to 2019, three years after the initial visit to Tsakane, and Changing The Story has grown significantly.

Opera Circus has been working with Henry and Tiffany from King’s College London and Jasmin from Sarajevo School of Science & Technology as research partners to co-develop a process that allows young people in Bosnia & Herzegovina to research, film and produce their own documentary film on a topic that matters to or interests them. There are similar collaborations happening in Colombia, Cambodia, Kosovo, Rwanda, South Africa, India, Kenya, Nepal, Malaysia, Venezuela and Zimbabwe. 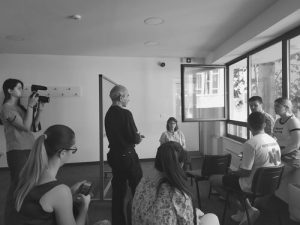 IZAZOV!’s first set of workshops in Sarajevo (probably before the project was re-named “IZAZOV!”) / Photography by Francesco Pipparelli

As for IZAZOV!, we have five beautiful films that have come out of this process, with more on the way. Each film touching on an issue or idea that is personal to the individual who developed and created it.

Taking part in the filmmaking workshops and discussions in Sarajevo over the summer, I have developed a new appreciation for documentaries and short films as a form of story telling.

Its no easy task, and I can say that as somebody who attempted to bring ideas and people together for two films that never actually materialised. Its not easy. It takes time, patience and probably a lot more persistence than I was willing to offer. Its clear that it also takes a certain willingness to let the story wander off wherever your interviewees take it, assuming you can secure the interviews in the first place.

Alas, we have a series of beautiful films. Some completed, others still a steady work in progress.

If you’ve been part of a TCFT project or workshop before you should know that the ‘process’ is far more important than focusing on what should be ‘produced’ by the end of it. The same can be said for IZAZOV!.

The priority is to create an environment where people who have never met before can learn from each other, develop new skills, share experiences, lend a hand to one another and collaborate generously. This has been the case with IZAZOV! and is perhaps one of the reasons why its no surprise that the filmmaking and relationships will continue beyond the films being developed and shared.

And so the process continues.

One thing that we are very conscious of is being able to share the films in the right spaces, finding opportunities to bring the films to new audiences and hopefully allow the films to start discussions about the issues and ideas present in the films.

We have a series of short films that are not only deeply personal and unique to the experiences of those who made them, but that are universal in the questions they put forward or feelings, memories or images they evoke.

We were extremely grateful to have been awarded a Mobility Grant from Changing The Story to be able to bring Baja, Berina and Hana to the UK to take part in a mini TCFT in Bridport in October. Over the course of the week, they took part in workshops with other young people from across Dorset, Devon, London, Italy and Sudan as well the chance to “premiere” their films at Bridport’s beautiful Electric Palace and over dinner at the 18th-century Bridport Town Hall as part of a community sharing and discussion. 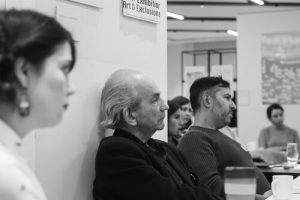 We then moved on to London to deliver a workshop at Bush House, home to BBC World Service’s broadcasting studios for over 70 years, as part of the ESRC Festival of Social Science where we were joined by people of all ages, backgrounds, professions and experience of filmmaking and activism.

It was another opportunity to share the IZAZOV! films with an entirely new audience, in a new city to start new conversations. Having previously seen the films, it was no surprise to me that the films were very well received and met with intrigue and though-provoking discussions.

Lamia, an IZAZOV! participant and filmmaking mentor from Sarajevo, will also be coming to the UK to develop and share her film. Unfortunately she could not join us last month due to UK visa complications.

Now that the films have ‘premiered’ in the UK, its time for them to be shown in Bosnia & Herzegovina.

We have plans for them to be shared in Sarajevo as part of an event or workshop where everyone is welcome to watch and discuss the films. We’ll keep exploring new opportunities to share the films while finding ways of allowing the films and the stories behind them to act as conversation starters with new audiences.

Not forgetting that this process is part of a wider research project, there will be time to reflect on the experiences, films and discussions. The findings of this phase of the project will be submitted to a research journal by Henry, Jasmin and Tiffany. This process (IZAZOV!) and its overarching project (Changing The Story) place equal emphasis on the importance of creative practices and the ongoing research happening behind the scenes, which is incredibly rare!

From conversations that started during the IZAZOV! visit to the UK, there is also a small group from Weymouth and the Isle of Portland who are considering bringing young people together for a similar process, inspired by the IZAZOV films and Changing The Story process.

In the spirit of TCFT, it wouldn’t have been possible to have achieved any of the above without the support, ideas, generosity and collaboration of so many people from across Europe and from different worlds of the arts, academia and the wider communities that we find ourselves in.

Thank you to everybody so far who has helped made the workshops, screenings and community events possible, including:

A CULTURAL PATH FOR FILM